View Summerlee Museum in Coatbridge in a larger map 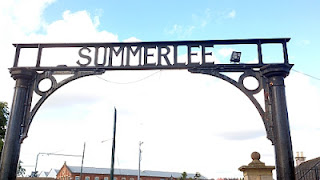 Summerlee in Coatbridge, Lanarkshire is a museum dedicated to industrial life and includes heavy engineering equipment, a reconstructed coal mine, a working tramcar, workers cottages equipped with items from various decades and an indoor museum.

It is run by North Lanarkshire Council and is a 'VisitScotland' '4-star' rated visitor attraction. In the last few years 10GBP million has been spent on its redevelopment. On the day of our visit it was a warm and sunny which made it more enjoyable.

The museum is built on the site of the old Summerlee Ironworks and includes the main workshop of the former Hydrocon Crane factory, which in now used a visitor centre. The museum shows Lanarkshire's contribution to engineering with its many items of equipment.

As it was such a good day we spent most of the time looking at the external buildings and equipment rather than the indoor exhibits. The tram was operating throughout the day ferrying passengers to the mine. We walked the short distance to the mine and the miners cottages.

Unfortunately the mine visits were fully booked so we spent some time in a small street which contained the houses of former miners which were in use when the mines were fully operational. The houses were furnished in the style of different periods from the 1840's until the 1980's.

It was very interesting seeing how household fashions change over the decades.

We were only able to see the external part of the mine but there was not much to see at ground level.

There a large locomotive on display. This was a No. 4112 locomotive built by the North British locomotive Company in Springburn, Glasgow in 1956. During its working life it had been used in South Africa to transport to transport freight.

Another large piece of engineering equipment was a rail steam crane which was made in 1944 by Marshall Fleming for Colvilles Steelworks and used at Clydebridge Steelworks in Rutherglen and the Dalzell Steelworks in Motherwell from the 1950's until 1986. It was the last steam crane made in Scotland.

They were used as railway breakdown cranes and are often seen on heritage railways in the United Kingdom.

The above is a short description of the day. There were many items of equipment indoors and I will write about these in a later article as well as the visit to the mine. It is a great day out and well worth a visit.