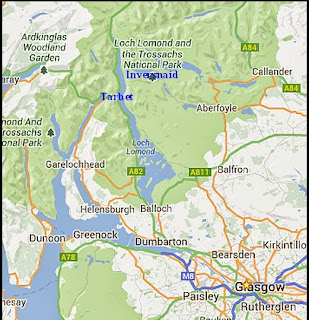 Today I went on a trip to Inversnaid on Loch Lomond. Inversnaid is on the eastern side of the loch and is quite difficult to get to by road. However, there are a few ferry companies who carry passengers on the loch, dropping them at various locations. I used the company "Cruise Loch Lomond"  who run cruises from Luss and Tarbet.

The trip I went on today left from Tarbet and I had to travel on a Scottish Citylink bus as there is no train station in the village. The weather was very good, with bright sunshine and high temperatures. At Inversnaid I was going on a guided tour round the 2000 acre Royal Society for the Protection of Birds (RSPB) reserve.

The ferry was on two levels, with an enclosed area below and an open area on top. As it was a very warm day, everyone sat on the top deck. Two reporters from BBC Radio Scotland were also on board, collecting material for a radio programme on the area.

The ferry had all the usual facilities and had a small area selling tea and coffee, as well as alcoholic beverages. The journey across to Inversnaid was nice and smooth, as the water was very calm and we were given many interesting facts about the area by the captain.

The scenery in this part of the UK is spectacular and quite breathtaking and the many passengers enjoyed it. There were people from the USA, Australia, Southern Ireland and Southern England.


On the ferry we had spectacular views of the hills in the area including Ben Lomond. On approaching Inversnaid, the hotel there came into view. This was built as a hunting lodge for the Duke of Montrose in 1790.

Many famous people have stayed there including Queen Victoria and William Wordsworth. American writer, Nathaniel Hawthorne also came here in 1857 and greatly admired the Lochs and mountain views. It is also believed that Robert the Bruce hid in a cave near the hotel during the Scottish Wars of Independence.

William Wordsworth wrote "To a Highland Lass" while staying at Inverbeg Hotel.

Sweet Highland Girl, a very shower
Of beauty is thy earthly dower!
Twice seven consenting years have shed
Their utmost bounty on thy head:
And these grey rocks; that household lawn;
Those trees, a veil just half withdrawn;
This fall of water that doth make
A murmur near the silent lake;
This little bay; a quiet road
That holds in shelter thy Abode—

Next to the hotel are the Arklet Falls

On arriving at Inversnaid we walked along part of the West Highland Way path before turning onto the path on the RSPB site.The bluebells were in full bloom and we were able to excellent views of these beautiful flowers. 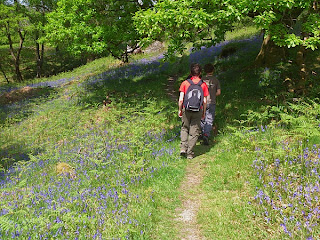 Birds in the Area

As we walked along we heard Chaffinch, Wood Warbler, Blackcap, Cuckoo, Tree Pippit and a Woodpecker.
On some of the trees there were nesting boxes for Pied Flycatcher. These are specially designed to avoid the nest being attacked by Pine Martin.


The walk included a steep climb up steps to the summit but it was not too strenuous. The area is an SSSI – a site of special scientific interest and there are some rare plants and mosses in the area.

View of Loch Lomond from Top of a Hill

At the top we stopped to admired the views over Loch Lomond.

We then continued around the reserve before re-joining the West Highland Way path. Across the loch could be seen Loch Sloy Hydro Electric power station. This was opened by the late Queen Mother on 18th October 1950 and is still the largest hydro electric power station in the UK.

On the way back a small frog was spotted on a path but it soon made its way back to the safety of the undergrowth.

On walking back to Inversnaid we met many walkers on the West Highland Way. They were still  only a few days into the journey and the sunny weather helped keep their spirits up.
I wondered how they might feel if the sunny weather is replaced by wet and windy conditions. On arriving back at Inversnaid we had lunch overlooking the loch.

The ferry arrived at the correct time and the journey back was as smooth as the outward one. We were able to catch a glimpse of snow on Ben Lomond
Honeymoon Island
On the way back we passed a small island called "Honeymoon Island". This was used by local gypsies who were ferried to the island after being married. If the newly-married couple were able to live on the island for two weeks without having an argument it was sign the marriage would be a happy one.

We also got another look at the hills surrounding the loch and again enjoy the beauty of the area.

Returning Home
Arriving back at Tarbet we enjoyed some ice cream at a cafe beside the loch before waiting for the bus to return us to Glasgow.

Tarbet Hotel
The bus stops in the village are beside the beautiful Tarbet Hotel. The present building dates back 250 years and was built in the Baronial style. The views from the guest rooms provide good views of the loch.

The ferry company Cruise Loch Lomond organise a number of tours from Luss and Tarbet with various drop-off points so allows visitors to visit many of the more inaccessible places on the loch which are too difficult to travel to by road.

Photographs of the visit can be seen here.