The other day I was visiting a private dentist in Newton Terrace, Glasgow for a consultation on repairing a few of my teeth which were damaged in an accident.


On the walk from the railway station I passed Charing Cross which has some beautiful buildings but their beauty has been spoiled to an extent by the M8 motorway which prevents admiring them fully.
Below are some of the photographs I took.

Designed by Glasgow architect J.J. Burnet and completed in 1891, this magnificent building was influenced by the architect's French training at the Ecole des Beaux Arts. The mansions were influenced by the Parisian Hôtel de Ville which was originally built in 1530 and then rebuilt in 1888. It connects St. George’s Road with the eastern section of Sauchiehall Street.
The fine detail of the mansions can be seen above. This building would have been the home to many well-to-do people.


I had difficulty taking a photograph of this due to the location of the sun in the sky and only managed to photograph one side.

The fountain is also known as the Charing Cross Fountain and is Glasgow's own miniature "Leaning Tower of Pisa" due to it leaning to one side.
It is a Doulton terracotta structure on a granite base and was designed by Robert Brydon. It was installed in 1895-6.


The inscription reads as follows:


In Honour Of
Sir Charles Cameron, BART. D.L.L.L.D.
In Recognition Of
His Many Services To This City
And To Scotland
During 21 Years In Parliament
1874 - 1895


The Mitchell Library is the largest public library in Europe. This is another magnificent building, but is very difficult to view because of the motorway running in front of it.

Funding for the library was given by Stephen Mitchell, a wealthy tobacco manufacturer, whose company, Stephen Mitchell & Son, would become one of the constituent members of the Imperial Tobacco Company. The building was opened in 1911.

The distinctive copper dome surmounted a bronze statue was designed by Thomas Clapperton and is often referred to as Minerva, the Roman goddess of wisdom.

This Church of Scotland building is located in Bath Street and was built with beautiful polished Kenmure sandstone. It was designed as an Independent Chapel by London architect J T Emmett in 1852. The windows were designed by Norman Macdougall in 1905 and depictthe four Disciples of Christ.


A church centre was added in the 1960's which includes the Oasis Café which serves lovely meals and snacks.

The Square Mile of Murder was first mentioned by the Scottish journalist and author Jack House, in his 1961 book of the same name. Four of Scotland's most infamous murders were committed within an area of one square mile (3 km2) of Charing Cross.

The murders involved Madeleine Smith, Jessie McLachlan, Dr. Edward Pritchard and Oscar Slater. Of these four, only Dr Pritchard was found guilty of murdering his wife and mother-in-law and he was the last man to be hanged in Glasgow in front of 100,000 spectators.

Madeleine Smith was found  'not proven' by a court for murdering her lover. Jessie McLachlan spent 15 years in Perth Prison for a horrific murder that no-one - except the judge and jury - thought she had committed. She was lucky not be hanged.

Oscar Slater was wrongly-identified as the man seen leaving a crime scene and spent 18 years in prison for a murder he did not commit. This may have been because he was foreign, Jewish and living with a woman who was not his wife.

The information regarding these cases can be found in the Mitchell Library.

It had been a good day out - flicking through Gucci, Prada and Eden books in the lounge of the dental clinic and admiring the beautiful buildings while walking in the area. 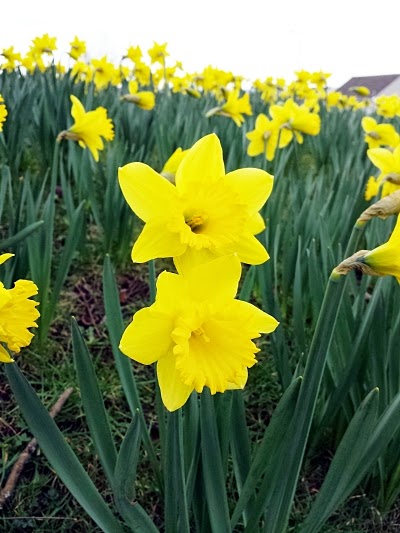 Daffodils always signal the coming of summer and the end of the dark winter days. It also reminds me of the poem, Daffodils, by William Wordsworth which was inspired by a springtime visit to Glencoyne Bay on the western shores of Ullswater. This is a beautiful area of the Lake District in England.


"Daffodils" (1804)
I wandered lonely as a cloud
That floats on high o'er vales and hills,
When all at once I saw a crowd,
A host, of golden daffodils;
Beside the lake, beneath the trees,
Fluttering and dancing in the breeze.

Continuous as the stars that shine
And twinkle on the milky way,
They stretched in never-ending line
Along the margin of a bay:
Ten thousand saw I at a glance,
Tossing their heads in sprightly dance.

The waves beside them danced, but they
Out-did the sparkling leaves in glee;
A poet could not be but gay,
In such a jocund company!
I gazed—and gazed—but little thought
What wealth the show to me had brought:

For oft, when on my couch I lie
In vacant or in pensive mood,
They flash upon that inward eye
Which is the bliss of solitude;
And then my heart with pleasure fills,
And dances with the daffodils. 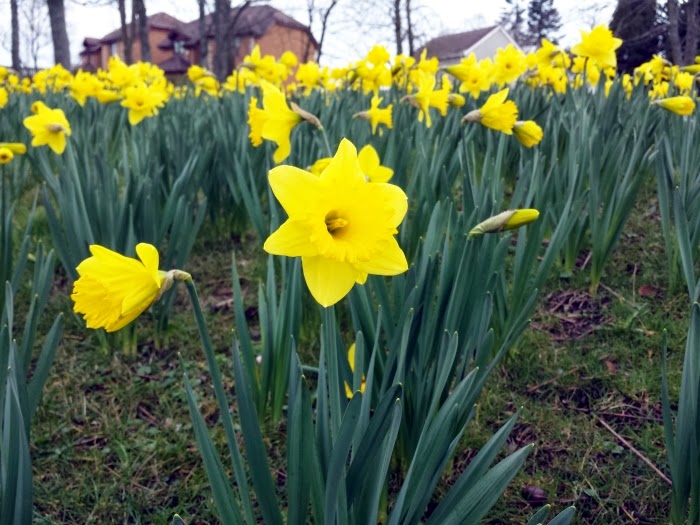 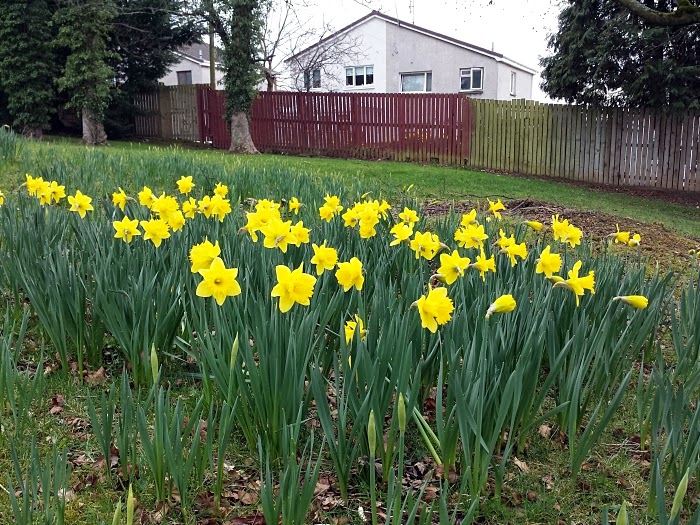 The above photographs were taken at the bottom of Airbles Road in Motherwell. As I was cycling up the hill I stopped and took some photographs of them.

A previous article I wrote on Derwent Water in the Lake District can be read here. It gives an idea of how lovely the area is.
Posted by Janesblog at Monday, March 23, 2015 No comments:

It was an early start this morning as I wanted to get in a round of golf on my local 9 hole course and go bird watching after it. It was very cold and there was some frost on the course at 7.00am but this soon cleared.

During the winter the course is maintained and many tees and greens are not in use. Temporary ones are used instead. This should last until about the beginning of April when the course will be back to normal.

While on the course, the sound of music could be heard and it was obvious that there was an event on in Strathclyde Park. When the music can be heard as early in the morning as 8.00am it usually means that it is a running event.

After finishing the 9 holes, I was making my way home by foot, pulling my golf trolley behind me. In the Palace Grounds in Hamilton, I saw some runners and was told that it was a duathlon was in progress - South Lanarkshire Leisure Duathlon. This consisted of a 5K run, 20K bike and another 5K run.

While passing, I managed to get some photographs of the action with my phone. 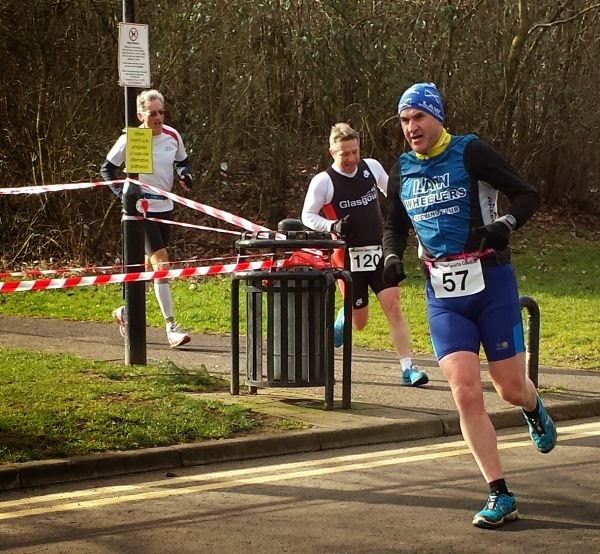 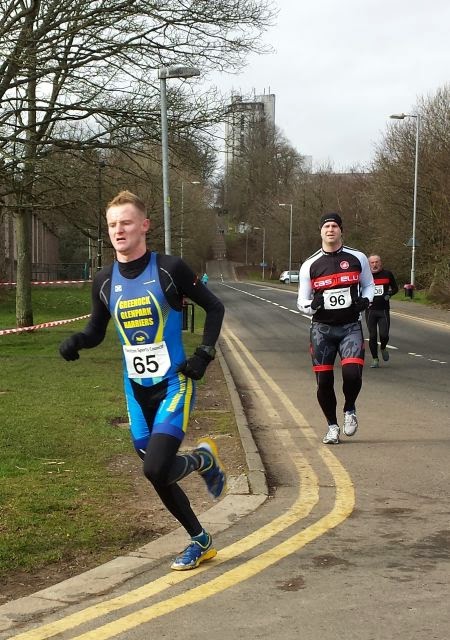 After completing the first 5K run, the competitors had to collect their bikes and start on the road racing part of the event.

As the competitors left the transition area with their bikes, they had to get their cards scanned. This presumably was to help the organisers in getting the details of the competitors times during the event. The competitor above is being 'scanned' by the woman on the left. 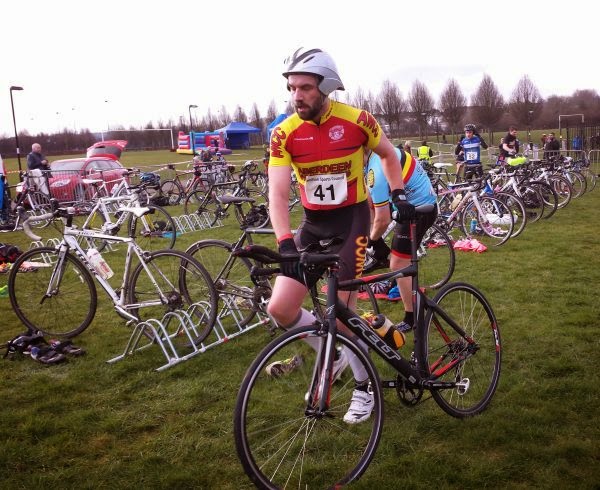 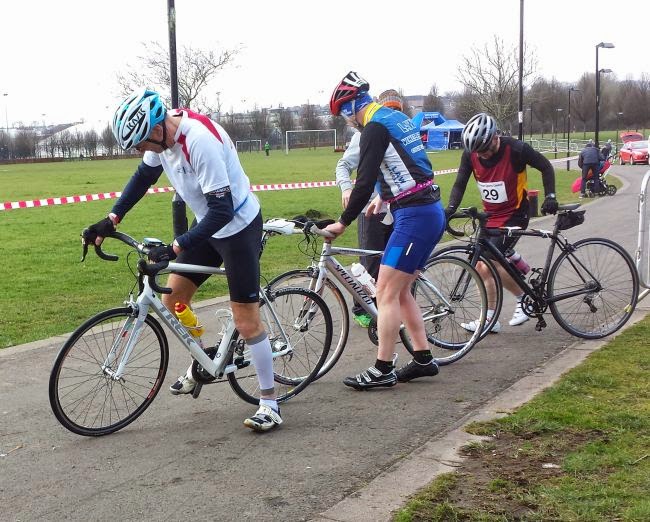 The cycling part of the event was around the closed roads of Strathclyde Park. This was the course used last year at the Commonwealth games triathlon. This is not easy - there are quite a few small sharp hills in Strathclyde Park. 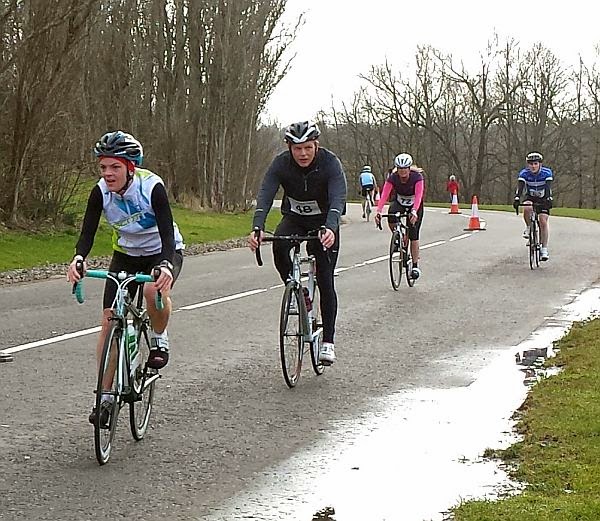 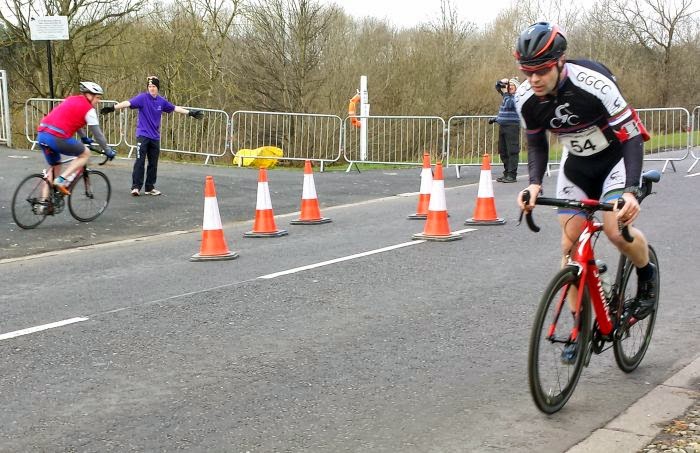 The camera phone coped reasonably well in taking the photographs but will never replace a 'proper' camera with a good lens.

All-in-all it had been an eventful morning despite it only being 10.30am.
Posted by Janesblog at Sunday, March 15, 2015 No comments:

Now that Spring is here, I will be using my Brompton to cycle to work instead of taking the bus. This has the benefit of saving me the 45.00GBP which I have to pay for my monthly bus ticket. I tend to take the bus to work from November to February as it is too cold to cycle and the roads are not always free from ice.

My Brompton 'S' bike (which is the one with the flat, sporty handlebars) does not come with a luggage rack so I was thinking on how to carry my items to work without having to wear a backpack.


After searching the internet I found a Brompton bag, but as it was quite expensive I thought I would try and see if any of my existing bags could be used instead.

One of the things I noticed was that the Brompton bags are mounted on a frame and inserted into the carrier block on the front of the bike. Mine came with the carrier block so that was one item I did not need to buy.

I then looked at the mounting racks and saw one for 20.00GBP which was for sale in a shop in England. I sent away for one and it arrived the next day, which was very fast indeed.


The next thing was finding an existing bag to fit the frame. After looking at the bags I already owned, I picked up my Timbuk2 Classic Medium courier bag which I had bought last year in a sale for less then 30.00GBP.

The bag fitted well, but the base of it sagged, so I needed a rigid material to put inside the base it. I thought of the material estate agents use for their signs and searched Ebay for this, but the sheets being sold were far too big for my needs.

I then went looking round the shops for something suitable and saw a 'Value' cat scratching pad in 'Pets at Home' which was quite light and quite rigid. It was a bit long so I cut about 2 inches off the end and it fitted perfectly.

For a back of the bag to make it quite rigid, I used a cheap plastic clip pad which is both light and rigid.

Securing the Bag on the Frame

Holding the bag secure without having to use straps or bungee cords which would be a faff, I decided to see if I could secure it using the loops on the bag. I used a system I have use in the past on my rucksack to hold my walking poles which is just a piece of cord tightened by adjustable cord toggles. I bought these in a local dress-making shop and the cord is very strong. I would prefer paracord but they didn't sell it.


This system holds the bag nice and secure and there is no danger of it falling off. For safety, it is essential to tuck away the shoulder strap in case it gets caught up in a moving part of the bike.

I also found a cheap fluorescent rucksack cover in my local Asda which was reduced to 3.00GBP. This fits the bag perfectly and will be ideal if it is raining, to save the bag from getting wet and also to provide extra visibility in the rain.


The raincover is also secure and shouldn't blow off in the wind.


So there we have it - a cheap way of carrying luggage on a Brompton bicycle. It should be noted that the 'S' model has lower handlebars and requires a smaller bag and frame than the 'M', 'P' and H' models.

If you are looking to put a bag onto a Brompton at as low a cost as possible, it is worth looking round at any existing bags you may to see if they can be used on the bag frame before buying a Brompton one.