Falkirk Wheel and the Antonine Wall

The weather this year has been very wet and this has prevented me from going out on the bike. However, as Spring approaches, it has become much dryer and warmer and so on a day off work I decided to cycle over to the Falkirk Wheel. I was also wanting to familiarise myself with the route as I will be leading a small group of cyclists there in a few weeks time.

To avoid cycling through the industrial areas of Coatbridge and Airdrie, I took the 30 minute train journey from Motherwell to Cumbernauld. The route below has been taken from my Garmin and the total distance travelled was 22.10 miles. 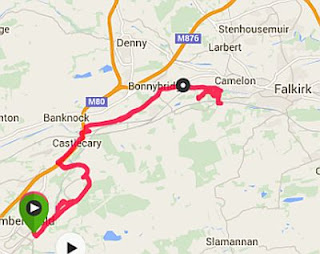 Cumbernauld to the Falkirk Wheel

I left Cumbernauld station and took the cycle path onto Forest Road. This is quite a busy road but at 10.10 on a Monday morning, it was quite quiet. I was going to stay on this road until the Wardpark area then join the B816 before turning left onto the cycle path leading to the Forth and Clyde Canal.

The cycle path had recently been resurfaced and some of the surface chips were a bit loose, but it was not so bad as to cause any wheel slippage. On this part of the journey, the sun was shining and I soon had to remove my long-sleeved cycling jersey as the temperature rose.

Throughout the ride along the canal path the surface kept changing and at one point resembled a section of the Paris-Roubaix cycle race! However as I approached the Falkirk Wheel the path was covered by lovely smooth tarmac which was a joy to ride on after the occasionally bumpy ride I had experienced up till then.

On walking into the main visitor area my eyes were immediately drawn to the miniature copy of the 'Kelpies'. The large Kelpies display is just off the M8 motorway at Falkirk. A Kelpie is the Scots name of a shape-shifting water spirit inhabiting the lochs and pools of Scotland. This is usually depicted as a horse.

This is the world's only rotating boat lift joining both the Union and Forth and Clyde Canals. It was opened in 2002 by Queen Elizabeth. When I arrived, there were no barges waiting to be transported by the wheel so I decided to explore the surrounding area and return later to see it in operation. The Wheel is managed by Scottish Canals.

I walked up the footpath outside the main visitor area as it was too steep to cycle up. At the top, I got a good view of the Wheel.

At the top of the hill, there was a small sign pointing to a path which led to Rough Castle and the Antonine Wall so I decided to cycle over to have a look. The path was generally smooth and good enough to cycle on. 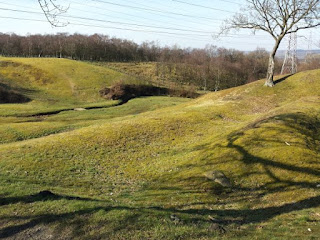 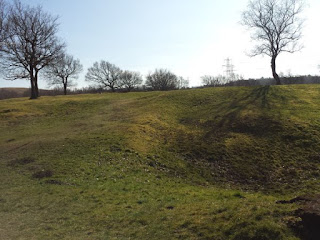 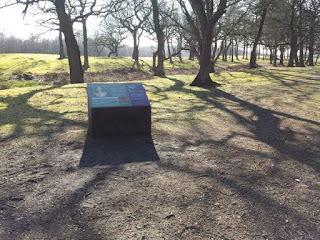 Unlike Hadrians Wall, the Antonine Wall had been built using tufts of earth instead of stone. It was roughly 3 metres in height. There was also a huge ditch to help the defences. In the photographs above the ditches can be seen.

The site was very interesting and I will spend some time in the future to discover more about this period in Scottish history.

After visiting the castle site, I cycled up to get a closer look at the aqueduct joining the canals and also to have a look at the Union Canal. A tunnel allows access for the barges and there is also a walkway for pedestrians and cyclists.

A barge was sitting at the last lock on the Union Canal and I watched as it was moved from the upper to the lower locks.

On my way back to the Wheel I stopped to have a look at the aqueduct. This is an 110m-long reinforced concrete trough supported by the curved concrete aqueduct pier arms which carry the barges to the Wheel.


The Wheel in Action

When I got back to the wheel there were two barges waiting to be moved so I was able to watch the Wheel in action.

Watching the wheel move two barges was fascinating. What a magnificent feat of engineering the Falkirk Wheel is! To avoid the Wheel parts being prematurely worn out, it rotates in both directions. The direction of travel of the Wheel is frequently changed to avoid this.
At 15.45 I decided to make my way back to Cumbernauld train station. The sun was still shining and it was still warm enough for me to continue wearing my short sleeved cycling jersey. I wanted to allow time to get to the station as I thought I might get lost. Cumbernauld, being a new town, has many roundabouts and these can cause confusion. I did have to consult the maps on my mobile phone a few times to ensure I was on the correct road as the roundabouts were quite confusing.

I arrived back at Cumbernauld station in plenty of time to catch the 17.22 train back to Motherwell. Once on the train, I was able to look at the photos I had taken of the day out. It had been a brilliant day which was helped by the warm and sunny day.